Dear Gabriel, If you are reading this, please stop disrupting my life if you are going to keep lying to save your ass at work,

I used to have this self proclaimed James Bond type of terrorist/occasional stalker/handsome guy/ cold as ICE and who claimed to be in love with me but always kept running away from me, then came back to talk about marrige. I am not going to say his real last name just to keep it ficticious.

Gabriel made up a name and even a fake ID to be Agent Matthew. Lol. “Matthew  my arse” said Charles, not me.

Charles is a beautiful man who talks about marriage too. He is another story…

Anyways, agent Matthew my Arse got on my last nerve because he is a huge coward who does not dare to see me in the eyes but instead, he facetimes me occasionally.

As the self made doctor that I am, I diagnosed  Gabriel with ADD/Bipolar Disorder/ Multiple Personality Disorder and three more disorders. I also gave him some free links to music that helps ADD people. Yes I sent him a link to Awolnations- Sail and some Eminem (M&M’s) rap links, and a bag of Skittles (to cleanse his renegades soul &to make him hyper as well. Hence the reason that he chose Matthew (M&M’s) I was Just trying to tell him to Sail away from my life if he was going to be such a fucked up coward and such an Eminem impresonator.

I got tired of him stalking me through Eddie, his favorite 20 something year old connection. Eddie is actually one of my middle school crushes back in Sen. Eddie Lucio Middle School. Eddie is also another coward who never dared to be my boyfriend, hence the reason I never had a stupid boyfried until I was 15 (because my mother was too hard on me too)

So going back to Gabriel/Matthew or I don’t know what he is in his mind (but I really do know where he works) I applied the science of “polite trolling” and it worked.

On Monday March 28, I unblocked this Gabriel stalker. I unleashed this beast from my blocked beast lists on Facebook. I then proceeded to propose to him Online. Oh my! It scared him so much. I just had to know how much he feared to fall in Love. He then told me to facetime him and I said YES to his Facetime Invite (haha)

Gabriels weakness is to get mind fucked since his weakness is being almost fully blown Bipolar. Don’t get me wrong, Two years ago, I was willing to marry him but I said No as soon as he flipped on me, so I flipped on him so that he could see that I am not to fuck around with.

Anyways, I told Gabriel to please do me the royal honor to block me on Facebook because I was sick of him haunting me once in a while with occasional time consuming Facetime calls that drove me Angry. (I dislike him now in 2016 by the way)

You may ask why I am angry at Gabriel. Well, let me explain politely. Gabriel was once drunk in a Bar causing a whole lot of Shenaningans in my hometown Brownsville Texas so I decided to go baptize him Mormom but he said “No” in a furious and Diabolical Bipolar voice because he was a Baptist and according to drunken Gabriel, Mormons did not believe that Christ lived (Mormons actually do lol) then I proceeded to hypnotize him and make him think that I was a terrible person by taking him to the Marriot hotel where he staying for his goddam James Bond Missions (The lovely idiot did not know that the Marriot was owned by Mormons lol just like Ancestry.com and more Planets)

I then politely told him that we had to become Jedis and colonize another planet but the coward said no. Haha

I then proceeded to tell him that day on his drunk stuppor that for him I could convert into a Baptist and then we could create a religion for Bipolars. Oh my! Gabriel was very angry! I was calm but then I said “Fuck it in a bucket” he is not my Frog and I left that day that I saved his ass royally but he could not save me, fucker! 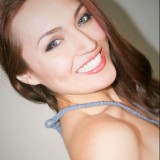 A very talented individual who loves the beauty of art and being an artist to all of its extense. I am very spiritual, honest, and have a strong personality. I love doing independent movies and planning on higher projects on the near future. I paint, I sing, I photograph, Hosting, TV commercials, Media modeling and more..... Overall, I am just another human being like you.
More Posts (31)